If you hike south along the Meskendirtal valley from Çavuşin, you will soon reach a turnoff to Güllüdere 1 in the east. After Haçlı Kilise you can follow a path into the southern parallel valley Güllüdere 2 and either return down this valley or continue walking up. At the top you will reach a viewpoint from where a road leads to Ortahisar. Another way back down into the Meskendir valley is through Kızılçukur valley.

At the end of the Güllüdere valley you will find the first cave churches. Some of them still have just enough fresco remains to give you an idea of what was here centuries ago. 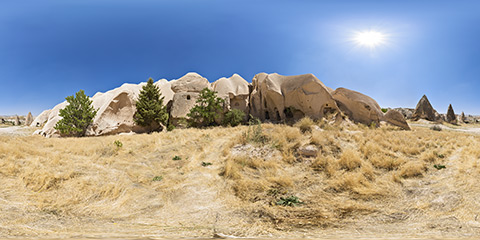 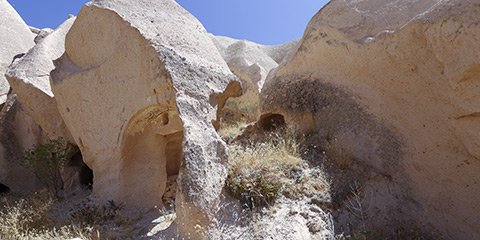 Although this small cave church (approx. 11th to 13th century) is still recognisable as such, one can clearly see the traces of wanton destruction. 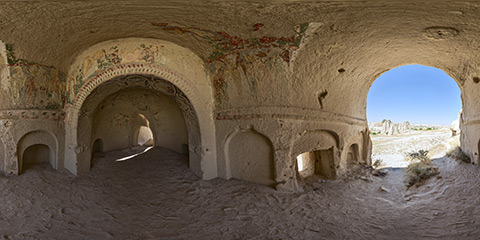 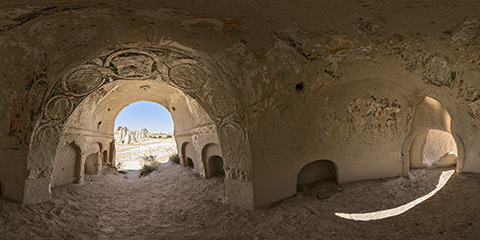 A little further up the valley is Üç Haçlı Kilise (church with the three crosses). The site probably dates from the 9th/10th century.

The present name of the church refers to the three cross reliefs on the ceiling. In Byzantine times the cross was particularly venerated and can be found as a relief or painting in many cave churches.

As the cave church was used for a long time as a stable, warehouse or otherwise, not much of the wall frescoes has been preserved. Only on the ceiling you can still see what it must have looked like.

Here the walls and ceiling are covered with a layer of black soot.

Small chapel opposite Ayvalı Kilise (Quince Church) further up in the Güllüdere, with a cross as central ceiling fresco.

At the top of the Cappadocian Güllüdere Valley lies the Haclı Kilise (= church with the cross) in a tuff stone cone. It is dated in the 10th/11th century. In the picture you can see the wooden staircase through which you enter the church.

Although it owes its name to the monumental cruciform ceiling relief, the view is immediately captured by the fresco in the apse, which depicts the Incarnation of God.

From Haclı Kilise you can walk towards the viewpoint until you reach the path from Güllüdere 2. If you now follow it into the valley, you will come to a shapeless rock. If there was not the small wooden bridge, you would probably pass it.

The fact that this rock is called Kolonlu Kilise (= Column Church) can be understood immediately after entering. What appears so massive from the outside is an almost completely hollowed out tuff, which suddenly appears very light. There are no frescoes here, only some red spots of colour and lines. It is considered one of the oldest cave churches in Cappadocia.

Pillars must be, even if they do not have a supporting function. And because they are hewn from the soft tuff, impossible shapes are also possible.

Magnificent façade (?) of a wealthy manor house in Byzantine times.