The Greek-Turk.-Population exchange 1923/24 concerned in Sinassos all inhabitants. The Greek majority had to leave the country despite the peaceful coexistence with their Turkish neighbours who lost friends and business partners. Turks from Thessaloniki replaced a part of the Greeks and gave the place the new name Mustafapaşa. This was in honour of Atatürk (Mustafa Kemal Paşa), who was born in Thessaloniki. Mustafapaşa is one of the few places where people are aware of its historical heritage. Many of the richly decorated Greek houses have been preserved and restored.
Little is known about life in the neighbouring Gomeda valley. But here in the cave church dedicated to St. Basilios you can find a ceiling fresco with one of the best preserved cross paintings of Cappadocia.

The Constantine - Eleni Kilisesi (Hagia Eleni) in Mustafapaşa (Sinassos) dates back to 1729 and was renovated in 1850. Today it serves as a small museum telling about the former Greek inhabitants of the village. Occasionally the church is used as a concert hall. Once a year the Greek Orthodox Patriarch comes here from Istanbul to celebrate a mass with the descendants of the former inhabitants who come from all over the world.

Not far from Mustafapaşa is the Timios Stavros church on the edge of the Gomeda Valley. It is one of the few cave churches with a bricked porch. Besides some remains of frescoes there are many handwritten Greek notes on the walls. Many years refer to the 19th century, others to 1923, the year of the Greek-Turk.-Population exchange.

Inside the cave church. 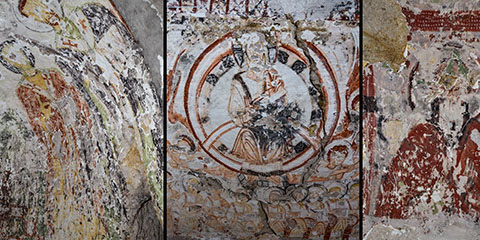 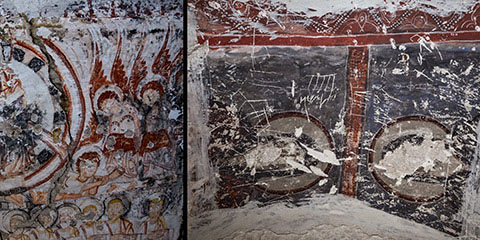 In the transition area from the cave church to the masonry area; in the ground a grave.

Single pictures of the church and the inscriptions. 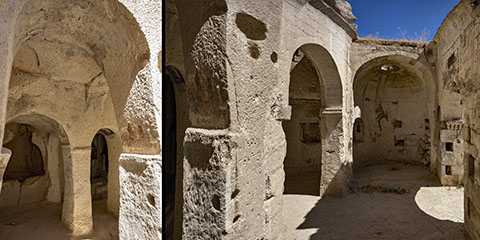 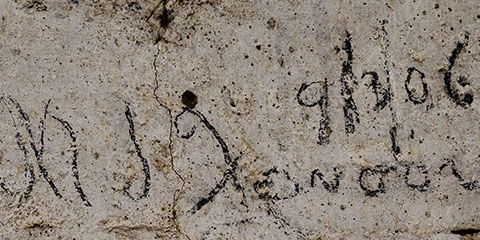 Above the Gomeda valley overlooking the rock with the Timios Stavros church. 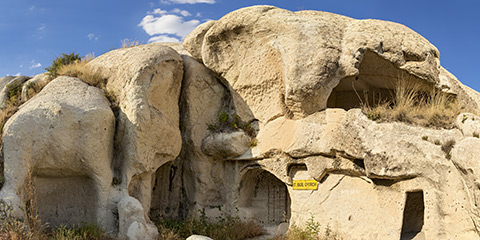 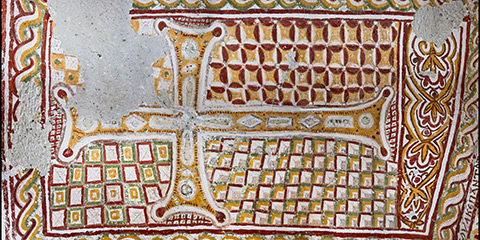 Agios Vasilios in the Gomeda-Valley.

Single images from the Gomeda Valley.