After a long period of Spanish domination, Cuba became officially independent at the beginning of the 20th century, but de facto completely dependent on the USA. Large parts of the Cuban economy are in American hands and lead to a rich upper class. They indulge themselves in magnificent palaces and in 1914 renovate the Gran Teatro de La Habana, built in 1838. More and more, Havana becomes a destination for US tourists and a refuge for mafia bosses. Their business models were based on gambling, prostitution and alcohol, among other things (especially during Prohibition from 1929 to 1933 in the USA). As the Mafia's influence grows, the government becomes more and more corrupt. The population becomes impoverished and begins to fight back. Under Batista, who becomes president in 1954 with the support of the mafia boss Meyer Lanski, the situation worsens. The movement around Fidel Castro gains more and more support and leads to Batista's flight and Castro's assumption of power in January 1959.

Evening atmosphere at the southern end of the Prado (Paseo de Marti). Newly renovated, the dome of the Capitol, a copy of the US Congress in Washington, shines. North of it is the Gran Teatro de La Habana, home to the Cuban National Ballet.

Right next to the Capitolio stands the Gran Teatro de La Habana. Since 1914, it has been showing off its lavish splendour with many balconies and turrets, and especially since its renovation 2015.

In the centre of Havana is the Parque Central with a statue of José Marti, the Cuban national hero. Already in the 19th century it was the hub of urban life. The first hotel in Cuba, Inglaterra, was built here in 1875 and declared an official cultural monument in 1981. Right next door, the Gran Teatro is home to the Cuban National Ballet. And opposite, on the other side of the park, the Museum of Fine Arts and the Manzana de Gomez, Cuba's oldest department shop.

Plaza de la Catedral
The religious centre of Havana is certainly the large square in front of the 18th century cathedral - Catedral de la Virgen Maria de la Concepción Inmaculada de La Habana. Until 1898, it housed the remains of Christopher Columbus. When Spanish colonial rule ended, they were taken to Seville. Today, the square is part of the heart of the old town of Habana Vieja, which has been a UNESCO World Heritage Site since 1982.

Plaza Vieja
On the occasion of Havana's 500th birthday on November 16, 2019, the Plaza Vieja was also restored. The square was already laid out in the 16th century and developed especially in the 17th century, when it was surrounded by representative colonial villas. The fountain in the centre is an exact copy of a fountain demolished in 1932, whose fence was removed for the 500 year celebration. In the morning it is still a quiet place, but as soon as the numerous bars and restaurants open, musicians start playing and tourists arrive, the square becomes very lively.
...in the morning and after sunset 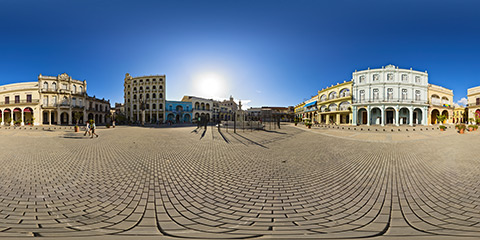 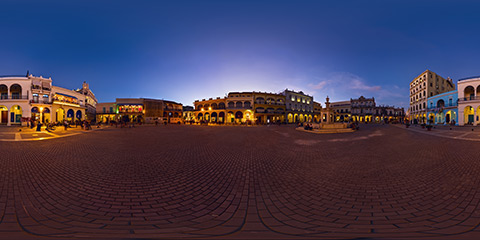 After the Cuban revolution under Fidel Castro, not only was the corrupt regime of Fulgencio Batista and the Mafia thrown out of the country, but the property of US corporations was also nationalised. The USA subsequently imposed a trade embargo on the country. Those who now owned a car kept it alive by all means, because there was no substitute. And so even today the streets of Cuba are full of American classic cars from the 1950s. Especially in Havana, a round trip in an open road cruiser is part of the programme of many tourists.

While on German roads predominantly black, white and gray cars spread a depressing dreariness, the color joy of Cuban vehicles is unmistakable.
Collage of more than 100 individual images with vehicles as they drive around throughout Cuba.

Viñales
The Viñales Valley has been a UNESCO World Heritage Site since 1999. From a fertile plain, the karst mountains, called mogotes, rise up to 300m high. The tobacco of the famous Cuban cigars grows on the agriculturally used areas.
In the Valle de las dos Hermanas, the artist Leovigildo Gonzales Morillo painted a 180m long rock face from 1959 to 1966 - the Mural de la Prehistoria. Evolution is briefly depicted in a blaze of colour. On the left it begins with yellow snails, followed by dinosaurs, an upright bear and on the right a human couple with a child.

A beautiful view of the valley and the mogotes can be seen from Hotel Los Jazmines a few km southwest of Viñales. To the left of the large mogote, you can see the road into the Valle de las dos Hermanas, which leads to the mural. The grey thatched houses are also striking. This is where the tobacco leaves are hung out to dry.

Mil Cumbres (1000 peaks)
is a national park located about 100km west of Havana. Originally an almost impenetrable jungle, the area is still sparsely populated. Sitting on this veranda on the edge of the jungle means listening to the orchestra of birds, following colourful butterflies and birds with your eyes, watching lizards catch insects, in other words enjoying the harmony of nature. Pure relaxation!

Playa Larga
At the northern end of the Bay of Pigs is the small town of Playa Larga (long beach). From here it is not far to Playa Giron, the place where CIA-trained Cuban exiles landed in April 1961 to overthrow Fidel Castro. However, they did not count on the great support of Castro by the local population and were devastatingly beaten.

Trinidad
Hardly any other city in Cuba shines as colourfully as Trinidad, founded in 1514. After an eventful history in which gold rush, smuggling, piracy, slave trade and sugar cane played a role, the city was impoverished at the beginning of the 20th century. Only after Fidel Castro's revolution did people begin to appreciate the historical importance of the place and supported the restoration of the historic old town. Today Trinidad is one of the tourist highlights of Cuba.

Parque Céspedes in Trinidad
The square was named after Carlos Manuel de Céspedes, who is revered as the founder of Cuba. After the release of his slaves, he and a number of allies begin the fight against Spanish colonial rule in Manzanillo in 1868. Céspedes falls in 1874, but the struggle only ends in 1878 with a peace treaty that is unsatisfactory for the Cubans.
This square, with the shady arcade in its centre, offers a free Wi-Fi network. This makes it a very popular meeting place among locals.

Morning in Manzanillo after a heavy night thunderstorm
The "Parque Céspedes" in the centre of the city of 100,000 inhabitants is surrounded by colonial houses. In its centre is a small pavilion "La Glorieta de Manzanillo". A pavilion from the Alhambra in Granada served as a model. It was built in 1923-24 and often served as a stage for orchestras. Outside the square, the city in southern Cuba makes a very run-down impression and seems far from any economic development.

Some of the offshore islands are connected to the mainland by a navigable dam. At a check point one pays a small fee and then has about 20km to go to Cayo Coco, as here.

Caibarien
The village was founded in the middle of the 19th century and achieved a certain local importance as a port and trading town. In September 2017 the city was hit by hurricane Irma. With sustained wind speeds of over 250km/h, this was one of the strongest hurricanes ever recorded. The city was flooded and almost completely devastated. Until today it has not been able to recover from it. - Scenes of a road junction. 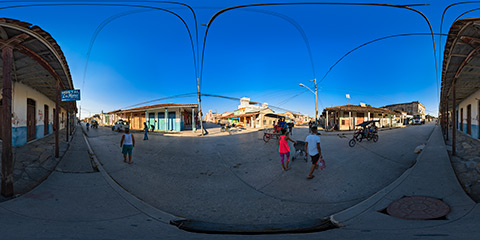 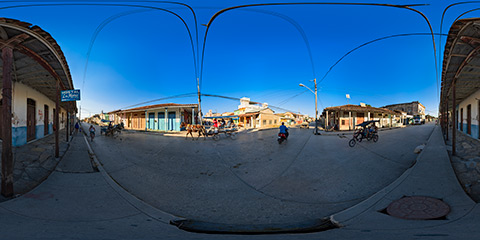 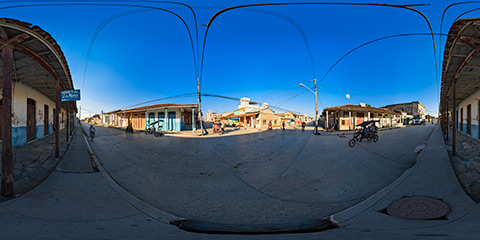 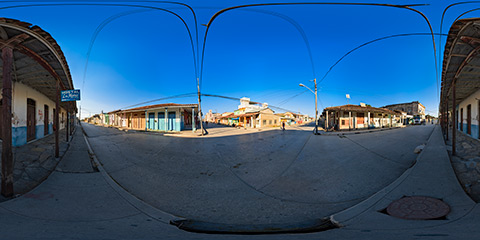 This is one of the oldest cities in Cuba and still has some colonial villas from the 17th century. In 1980 the town was officially declared a Cuban national monument.
Evening atmosphere in front of the Iglesia Parroquia de San Juan Bautista from 1692.

There are a lot of things that always catch your eye in Cuba. For example, many cities have a central square with a small park. Next to it there is of course the church. All this is lined by colourful houses in colonial style. American oldtimers, here a Chevrolet DelRay which was only produced in 1958, you will meet again and again. In all colors. Rarely in grey, black or white. If, then often two-colored. Beautifully dressed up oldtimers are mostly taxis for tourists. Locals rather use the bicycle taxi. Mostly it is a tricycle with a bench in second row, a roof for sun protection and a luggage rack above the handlebars. On it you can immortalize your admiration for Che Guevara, which is widespread all over the country. If you own a bike yourself, you will of course ride it. Gladly also in twos, whereby for smaller children a seat is made of wood. If this is to be made for a folding bicycle without a central bar, this is simply added by a wooden longitudinal bar to attach the child seat. The clothes of the Cuban women are also colourful. Occasionally shrill, but often enough not really tasteful. Leggings! They are worn everywhere, no matter if toddlers or great-grandmothers, beanpole or sumo wrestler! Maybe this is an expression of freedom, because as a schoolgirl you wear uniform: white blouse, black skirt, white knee socks. Boys also wear a uniform of white shirt and dark trousers. But outside school they prefer shorts to leggings - thank God!

Iglesia Parroquia de San Juan Bautista, Remedios (Kuba)
Although the church dates back to 1692, significant parts of the building, such as the wooden ceiling and the gilded altar, were not built until the first half of the 18th century. For fear of pirates, the gold of the altar had been painted over with white paint. Only during restoration work in the 20th century was the gilding rediscovered. One of the special features of the church is a statue of the Virgin Mary in which she is not only depicted pregnant but also dancing.

The small green area Plaza Marti is the central meeting place in Remedios. Here you will find the restored and colourful colonial houses with bars, restaurants and the Hotel Mascotte, which was first opened in 1876.

The Independence Statue at Remedios was a French gift on the occasion of the 100 years of independence of the United States in 1876. At that time Cuba was fighting for its independence from Spain. Right next door is the Iglesia de la Virgen del Buen Viaje, around which a legend is entwined: during a storm, two fishermen pulled a crate on board their boat and found a statue of the Virgin Mary inside. Back in Remedios they handed the statue over to a man. The next day the priest came to claim the statue for his church and transported it there. When he went to look at it the following morning, the statue had disappeared. It had miraculously returned to the man's house. Then people said that the statue had decided for itself where it wanted to stand. Since then, Remedios is the only city in Cuba with two churches in the same place.

Late afternoon view from the roof terrace of Casa Particular (private accommodation) La Casona Cueto over the roofs of Remedios.

Santa Clara
The Casa Autentica Pergola in Santa Clara is an old colonial house. In 2011, it was awarded the Provincial Prize for its elaborate restoration. A large number of birds gather in the courtyard in the afternoon, chirping loudly in discussion, only to leave again as suddenly as they came. Walking past the courtyard, one reaches the stairs that lead to the roof terrace restaurant La Aldaba.