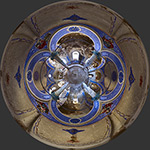 Agios Nicolaos, Kücükköy (Ilasan):
In the middle of the 19th century, after several hundred years, the Greek and the Armenian people in Turkey got the permission to build new churches. Especially in the central Antolian region of Cappadocia there are still many of them visible. Since the Turkish-Greek people exchange in 1923 most af them are abandoned, some had been changed to mosques, and some are ruined.

contains detail images of the wallpaintings and a Little Planet